Veteran lawman James Michael Gannon, who was involved in more than 100 homicide investigations in Morris County, taught police procedure in the Ukraine and played Santa Claus in the annual Boonton Firemen's parade, has launched a website that makes it official he is running in the June GOP primary for county sheriff. (...read the entire article at The Daily Record)

James Michael Gannon has announced his intention to run for Morris County Sheriff in 2016, as stated in his letter to the Morris County Republican Committee.

Please read the letter below, and feel free to offer your support in the comment section below! 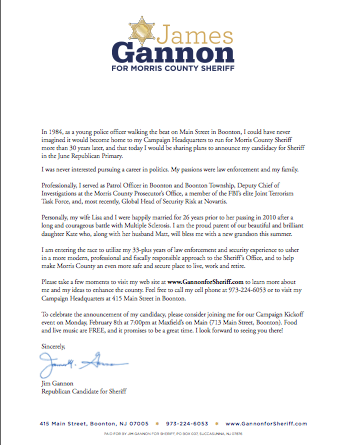 Click on the image if you'd like to see the entire letter, larger in your browser window.